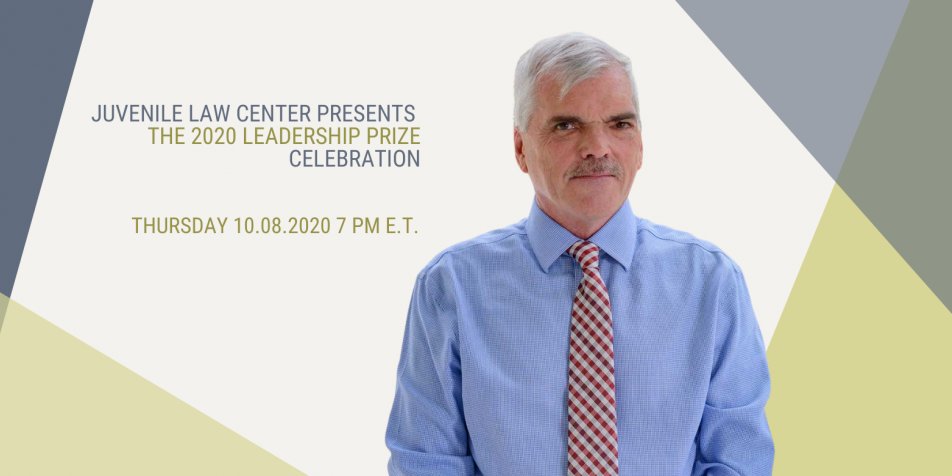 I am humbled to have received the Leadership Prize from Juvenile Law Center. Juvenile Law Center is one of the oldest and most effective organizations I know of that advocates on behalf of kids. There have been insurmountable issues before them which they have routinely overcome and there have been 1000’s of kids who have better lives because of their work. Their successful leadership in reforming or changing the law — whether it be in the trial court, the US Supreme Court, or state legislatures, is simply incredible.

As for me, as I once said, if maturity is accepting the world as it is, I never wanted to grow up.  And as a child whose formative years were in the late 60s, I always wanted to do more than just make money. When I came out of law school, I went to work at the Miami-Dade Public Defender’s Office where my first assignment was to work in juvenile court.  In those days that was the place you got to learn the law before moving on to do the “more important” felony cases.

I was instantly taken aback by the poor (if not terrible) judges. I remember one judge finding my kid “Not Delinquent” because he was ticked off at the horrible job the prosecutor had done. The judge looked me in the eye and said, “There Harper, is your one "Not Delinquent" case for the year.” The prosecutors were rabid, young; “lock them all up, we need protect our boss and not take any chances on the kids." Some of the public defenders just wanted to learn and get out, others who wanted to stay were nevertheless sent to adult court. The treatment system was horribly funded, horribly staffed and even more horribly designed. It was so obvious that the system was the disease and clearly not the cure. I remember thinking early on, "shame on us all".

And then there were the kids. The ones who needed the most help were the ones who were headed to adult court and then prison. Miami must have been the originator of the phrase “the school to prison pipeline.” We led the nation in transfers to adult court. Nearly all of the kids were poor, kids who had only one or none when it came to parents, who were abused, neglected and traumatized, mostly black and from horrific, poverty-stricken neighborhoods. They were crying out for help and just got more punishment all in the name of rehabilitation. The one thing the system did well was to conclude that once a kid got in trouble it was now their fault and no one really had to care.

And yet, what always struck me was that they were just kids. Kids who commit even terrible crimes are not as culpable as adults and clearly, as the science keeps telling us, most are capable of enormous change. Most are very damaged kids who can nevertheless respond to connections and treatment. One has to get into and understand their world rather than make them conform to our world which is alien and largely irrelevant to them. After all, they are just kids.

After working in felonies, I returned to the juvenile court as the head of the juvenile division. I tried to teach lawyers that they were also child advocates, to push back on the idea that everything was the fault of the delinquent child, that kids are less culpable and if given the right warmth and attention, most kids will respond favorably. It is we lawyers who are best equipped to represent kids. And juvenile law is a specialty not just a way to learn the law and move on. Juvenile lawyers must master the law, the local juvenile “system," the programs, the treatment options, the educational issues, the bottlenecks, the clumsy bureaucracy and the limited, and often the mean, actors. It is not easy work. It is a passion. Working on behalf of and with kids comes with great responsibility — your advocacy may be the last chance this kid has. But the spirits and resiliency of kids never cease to amaze me. There is nothing better than the joy of connection to the pure spirit of a child.

And back in the 80s and 90s, the justice system kept on getting meaner and more punitive. The meanest manifestation of this, which left me breathless, was when Patti Puritz of the ABA’s Juvenile Justice Center told me in1999 that there were five juvenile offenders scheduled to be executed in 2000, I was stunned. If a kid can be executed before he is even fully developed then all kids are less valued by our justice system and our society.  Fortunately, it was a group of juvenile lawyers who met, developed the legal strategies, made the many connections with the international community, the psychological, psychiatric and medical communities and organizations all over the country and the world which ultimately led us to eliminate the death penalty for kids.

As a result of that effort, all kids became more important. But, now it is up to you younger lawyers to build upon the groundwork that old lawyers like me helped establish. Godspeed.

Join us October 8th when we honor Stephen as our 2020 Leadership Prize Winner.

2020 Leadership Prize Winner, Shannan Wilber on Aspiring to More for all Youth

The Vanderbilt Project on Unity and American Democracy • March 22, 2022
END_OF_DOCUMENT_TOKEN_TO_BE_REPLACED