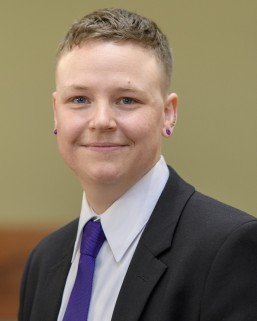 Vic Wiener is a 2020 Skadden Fellow at Juvenile Law Center. Originally from New Mexico, Vic works from Tulsa, Oklahoma. Their work focuses on ending the practice of placing youth on sex offender registries.

Vic graduated with highest honors from the University of Tulsa College of Law. There, Wiener served as the editor-in-chief of the Tulsa Law Review, president of OutLaws, the LGBTQAI+ student society, and on the board of immLaw, the immigration law student society. During law school, they interned with the National Center for Youth Law and with Juvenile Law Center. They also participated in the Terry West Civil Legal Clinic, primarily focusing on Tulsa’s eviction crisis.

Prior to law school, Vic spent five years working with LGBTQAI+ and homeless youth at Youth Services of Tulsa. Before beginning their work with youth, they spent five years volunteering and then working in the rape crisis and domestic violence field as a survivor advocate. Vic is invested in extricating societal responses to harm from the capitalist, racist, ableist, and heteropatriarchal criminal and juvenile legal systems.

Wiener has a bachelor’s degree in gender and women’s studies from Warren Wilson College.