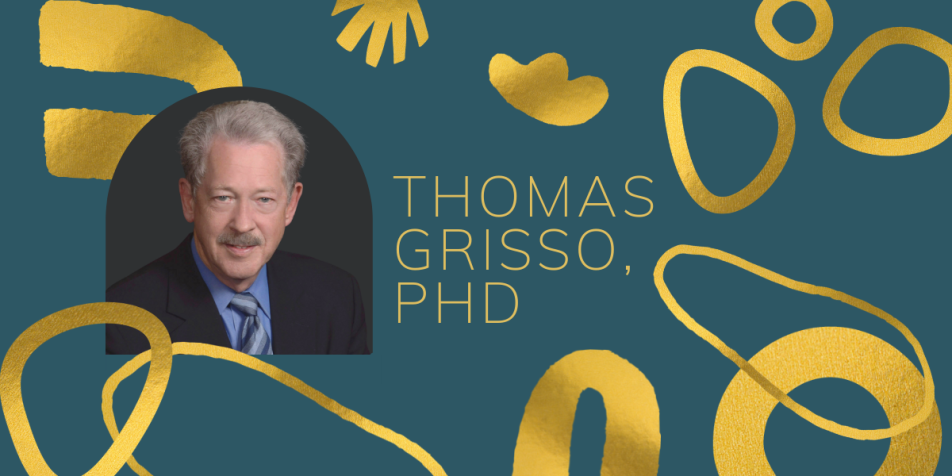 When young people become involved in the juvenile justice system, the response must take their development into account.

This understanding has been central to Thomas Grisso’s work throughout the years. Dr. Grisso began his career as a research and forensic psychologist at Saint Louis University in the 1970s and is currently an Emeritus Professor at the University of Massachusetts Medical School.

Dr. Grisso’s work has primarily focused on informing polices that affect youth in contact with legal systems and enhancing the quality of forensic mental health evaluations for youth in juvenile and criminal courts. His projects typically have begun with research on youths’ capacities and translating those results for application to law and policy. Dr. Grisso leveraged his research to produce tools and strategies that clinicians, lawyers, and justice system personnel can use to effectively make change in the world.

There is a direct line between Dr. Grisso's early work and recent reforms within the juvenile justice system, including the abolition of the death penalty and life without parole sentences for youth.

One example is when Dr. Grisso rose to the challenge of addressing the “superpredator” narratives surfaced against Black and Brown youth during the 1990s. The myth of the "superpredator" — a term used to describe a generation of youth who would terrorize and victimize our communities as we turned the corner on a new century — was coined in 1995 by John Dilulio Jr., then a professor at Princeton University. The term was squarely aimed at Black youths and dominated the public discourse at the time on crime and punishment. Legislators latched onto this rhetoric, claiming that the juvenile court was ill-equipped to deal with this “new breed” of offender – the “superpredator.” They enacted laws that transferred hundreds of thousands of young people to criminal courts where they were sentenced to death, life without parole, and other extreme sentences.

Dr. Grisso sought to overcome this negative rhetoric impacting the lives of youth. He worked with others to promote developmental reform of U.S. juvenile justice between 1996 and 2015 as a member of the John D. and Catherine T. MacArthur Foundation’s Research Network on Adolescent Development and Juvenile Justice and its Models for Change Initiative. While at the Network, he led studies on adolescents' competence to be trial defendants. Dr. Grisso was the lead author of "Juveniles' Competence to Stand Trial: A Comparison of Adolescents' and Adults' Capacities as Trial Defendants." The article appeared in Law and Human Behavior in 2003, showing that youths aged 15 and younger performed more poorly than young adults, with a greater proportion manifesting a level of impairment consistent with that of persons found incompetent to stand trial. Adolescents also tended, more often than young adults, to make choices (e.g., about plea agreements) that reflected compliance with authority, as well as influences of psychosocial immaturity.

This work has a significant impact on whether youth can be tried as adults and is central to Juvenile Law Center’s work around trying youth as adults. Dr. Grisso’s work highlights the key developmental differences between youth and adults that impact youth’s decision-making, impulse control, and susceptibility to peer pressure. And while these differences do not excuse youth from responsibility for their actions, the U.S. Supreme Court has repeatedly recognized that youth are less blameworthy than adults and more capable of change and rehabilitation (Roper v. Simmons, Graham v. Florida, J.D.B. v. North Carolina, Miller v. Alabama, Montgomery v. Louisiana).

Punishing children does not advance public safety. Research also shows that as young people mature, they are substantially less likely to re-offend. Locking children up for years extends their incarceration well beyond the time that can be justified for rehabilitation, public safety or accountability.

Dr. Grisso has been recognized for this important work and has received career achievement awards from major psychological, psychiatric, forensic psychology, and psychology and law organizations in the U.S as well as the U.K.

Juvenile Law Center invites you to virtually celebrate Dr. Grisso and his work (along with fellow winners Cyntoia Brown Long and Dorothy Roberts) on Thursday, May 12, 2022 at 7:00pm/ET during the 2022 Leadership Prize. You can register here. Recipients of the Juvenile Law Center Leadership Prize are leading lights whose inspirational careers are beacons for future generations and whose work has substantially improved the lives of youth. Read more about the awardees here.