Juvenile Law Center, in collaboration with the Defender Association of Philadelphia and faculty members at Temple University Beasley School of Law, Boston University School of Law, and the University of San Francisco School of Law, filed an amicus brief on behalf of Qu’eed Batts, who was sentenced to life without the possibility of parole (LWOP) for a homicide he committed at the age of 14. In Pennsylvania, LWOP is a mandatory sentence for anyone convicted of first or second degree murder.

The brief argued that the life without parole sentence violates the United States and Pennsylvania Constitutions as well as international law. In Graham v. Florida, the United States Supreme Court held that a sentence of life without parole imposed on a juvenile convicted of a non-homicide offense was unconstitutional, grounding its decision in developmental and scientific research demonstrating that juveniles possess a greater capacity for rehabilitation, change, and growth than adults, and reasoning that the sentence therefore served no legitimate penological purpose when applied to juveniles. Juvenile Law Center’s brief argued that Graham applied in this case as well, since the reasoning about the differences between juveniles and adults apply regardless of the type of crime at issue.

The brief also argued that the sentence is not in conformity with national and international sentencing trends, as only three other states mandate LWOP sentences for juveniles under the age of fourteen convicted of homicide and the United States is alone in the world in imposing life without parole sentences on juveniles.

On December 6, 2011, the Pennsylvania Supreme Court ordered a hold placed on the case pending disposition by the U.S. Supreme Court of Miller v. Alabama. Upon review of the Miller decision, which banned mandatory life without parole sentences for juveniles, the Court found that supplemental briefing was warranted to resolve the issues upon which it granted allowance of appeal. Accordingly, Juvenile Law Center and the other parties were ordered to submit supplemental briefing on the following issues: 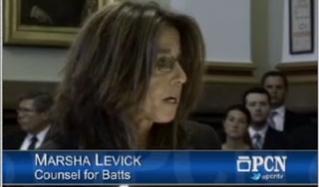 On March 26, 2013, the Pennsylvania Supreme Court held that Mr. Batts was entitled to a resentencing hearing. At that resentencing, Mr. Batts can receive a sentence of life with parole or life without parole. The Court gave the trial court the discretion to determine Mr. Batts' minimum sentence (or parole eligibility), emphasizing that trial courts must consider "appropriate-age related factors." The Court relied in part on the United States Supreme Court's decision in Miller.

Following remand, on May 2, 2014, the Northampton County Court of Common Please sentenced Mr. Batts to life without the possibility of parole for a second time. On June 10, 2014, Mr. Batts appealed his resentencing to the Superior Court of Pennsylvania.

After the Superior Court affirmed Mr. Batts' sentence in 2015, Juvenile Law Center  joined the Defender Association of Philadelphia and attorneys Lauer, Fulmer, and Ward as co-counsel for Mr. Batts in his appeal to the Pennsylvania Supreme Court. Our brief urged the Court to establish guidelines to ensure that life without parole sentences are not imposed in a manner that is unconstitutionally arbitrary and capricious. We further argued that Mr. Batts' resentencing to life (and death) in prison was unconstitutional because it provided him with fewer procedural safeguards than an adult facing capital punishment.

In 2022, the Pennsylvania Supreme Court held in Commonwealth v. Felder that its decision in this case was abrogated by the recent U.S. Supreme Court decision in Jones v. Mississippi. The Court stated that “we are left with no choice but to dissolve those procedural requirements in Batts II that are not constitutionally required — namely, the presumption against sentencing a juvenile homicide offender to life without parole, and the imposition on the Commonwealth of the burden of proving beyond a reasonable doubt that the juvenile is permanently incorrigible.”