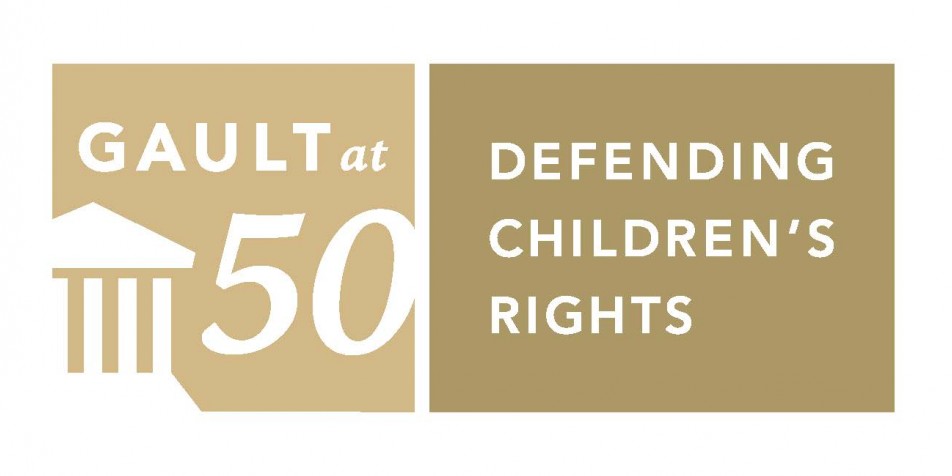 Today is the 50th Anniversary of In Re Gault, the U.S. Supreme Court case that granted children the right to counsel and other key due process protections when facing delinquency charges in juvenile court. Fifty years later, full implementation of the decision remains uneven, but its promise still guides our advocacy as we continue to work to ensure that kids are treated fairly by our justice system.

In Gault’s wake, four recent law school graduates, inspired by the promise of Gault to provide legal services to children, started Juvenile Law Center in 1975. Even then, we recognized that children’s rights were civil rights that required dedicated and vigilant protection.

Reading the decision today, it is striking in its foresight: In 1967, the Justices understood that adolescence was a transient, developmental stage; that children could not navigate the justice system without the “guiding hand” of counsel, including when interrogated by law enforcement; the importance of trauma-informed treatment amid harmful conditions of confinement; and the value of confidentiality and protection from release of records that could prohibit future opportunity.

First, Gault recognized that adolescence is a stage of life that should be treated with special care by the courts but with due process protection. Gerald Gault was arrested for making a lewd phone call with a friend to a neighbor. In describing the offense, the Supreme Court remarked, “It will suffice for purposes of this opinion to say that the remarks or questions put to her were of the irritatingly offensive, adolescent, sex variety.” While we may smirk at this comment, the Arizona state court sentenced Gerald to up to 6 years of incarceration for his participation in the call.

The Court was equally prescient in recognizing the special vulnerabilities of youth during police interrogations. The Gault court emphasized:

[W]e cannot believe that a lad of tender years is a match for the police in such a contest. He needs counsel and support if he is not to become the victim first of fear, then of panic. He needs someone on whom to lean lest the overpowering presence of the law, as he knows it, crush him. No friend stood at the side of this 15-year-old boy as the police, working in relays, questioned him hour after hour, from midnight until dawn.

In discussing the conditions that Gerald faced in confinement, the court explained:

The fact of the matter is that, however euphemistic the title, a "receiving home" or an "industrial school" for juveniles is an institution of confinement in which the child is incarcerated for a greater or lesser time. His world becomes "a building with whitewashed walls, regimented routine and institutional hours. . . ." Instead of mother and father and sisters and brothers and friends and classmates, his world is peopled by guards, custodians, state employees…”

Finally, the Gault Court noted the importance of limiting the release of juvenile records after a delinquency adjudication. Fifty years ago, the Court stated:

…one of the important benefits of the special juvenile court procedures is that they avoid classifying the juvenile as a "criminal." The juvenile offender is now classed as a "delinquent…” It is disconcerting, however, that this term has come to involve only slightly less stigma than the term "criminal" applied to adults….It is also emphasized that, in practically all jurisdictions, statutes provide that an adjudication of the child as a delinquent shall not operate as a civil disability or disqualify him for civil service appointment. 387 U.S. at 24.

We are proud of our efforts and record on these crucial issues and remain committed to fulfilling the promise of Gault. Juvenile Law Center has served as co-counsel or amicus counsel in all five subsequent Supreme Court decisions that have brought developmental and neurological science to the forefront in its application of key constitutional provisions to children. Applying the Eighth Amendment’s ban on cruel and unusual punishment, the court banned the death penalty for juveniles (Roper v. Simmons, 2005); life without parole for non-homicide offenses (Graham v. Florida, 2010); and mandatory life without parole in Miller v. Alabama (2012) and Montgomery v. Louisiana (2016).

In the fifth Supreme Court case relying on adolescent development research, the Court ruled that youth is a specific factor that must be taken into account in determining whether or not Miranda warnings must be given to children. J.D.B. v. North Carolina (2011).

Unquestionably, much progress has been made in the establishment of a fairer and more effective justice system for children, but much work remains to be done. Children continue to appear in court without counsel, and only a few states prohibit the waiver of counsel entirely by children. Solitary confinement, the use of chemical and mechanical constraints and other harsh practices continue to harm our children in the name of holding them accountable for their conduct. Records follow children into adulthood, drastically limiting opportunities for successful paths to adulthood, and fees and costs imposed on youth often follow them, risking repeated incarceration based on inability to pay. Youth remain subject to coercive and highly suggestive interrogation practices by police, resulting in high rates of false confessions among our youth.

Fifty years after Gault and six years after J.D.B, we advocate not just special care but the necessity of counsel, without waiver, at every interrogation. Such counsel must be appointed without the imposition of crippling fees, sometimes even assessed against children and families deemed indigent by the state courts. We lead the effort to eliminate costs and fees in our juvenile justice system.

In our current class action lawsuit in Wisconsin challenging use of solitary and other harsh conditions at two juvenile facilities and in many other appellate cases, we argue against the harsh conditions that persist in our juvenile justice system.

Today, we actively pursue expungement of juvenile records to avoid the civil disabilities regarding education, housing and employment that continue to prevent a youth from fulfilling their full potential after exiting the juvenile justice system.

We stand with our many partners across the country who have worked to fulfill the promise of Gault and continue to do so effectively. Happy Anniversary! Onward!