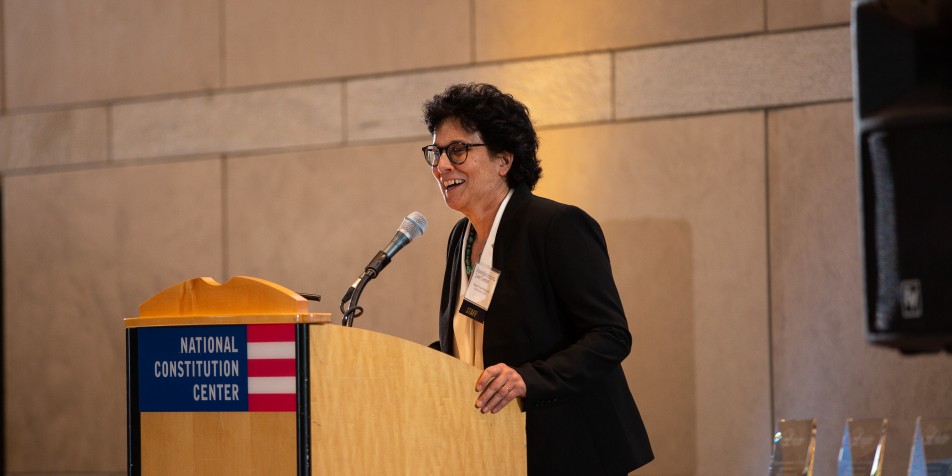 Over the next four months, through a series of online events and blogs, we will look back on our 45 years of advocating for rights, dignity, equity and opportunity for youth in the child welfare and justice systems. Amidst COVID-19 and the racial reckoning underway in our country, it is challenging to celebrate (but we need to do so!) - and critical to reflect. I began my legal career right out of law school as a fellow at Juvenile Law Center and have thought a lot about our advocacy then and now. I look forward to coming together with you to honor our past and present work. Watch for our communications and 45-minute virtual lunchtime conversations to commemorate our 45th anniversary beginning November 5th.

Founded in 1975 by four recent law school graduates who saw children’s rights as the next frontier in the battle for civil rights, Juvenile Law Center is the first non-profit, public interest law firm for children in the country. Over the four and a half decades of our work, Juvenile Law Center has gone through several critical transformations. When Juvenile Law Center opened, it was called Juvenile Law Center of Philadelphia. In a year when Elton John’s Philadelphia Freedom was near the top of the charts, this name captured the local nature of our work. But the office evolved from representing individual children in judicial or administrative proceedings to a focus on system-wide impact and systemic reform, through litigation, policy advocacy and other strategies; we also developed a Youth Advocacy Program to center youth voice in our work. We evolved from a local organization to a national one; to engaging with children’s rights advocates around the world; and to becoming experts in adolescent development as the key driver of justice reform for youth in the 21st century.

In 1996, we were invited to join the MacArthur Research Network on Adolescent Development and Juvenile Justice to work with psychologists, neuroscientists and other experts in adolescent development to examine the connections between developmental science and juvenile justice system policies and practices. We co-counseled or led amicus brief efforts in five landmark U.S. Supreme Court decisions that relied upon this science to eliminate the death penalty 15 years ago in Roper v. Simmons; declare life without parole for non-homicide offenses unconstitutional 10 years ago in Graham v. Florida;  expand that holding to include homicide convictions in Miller v. Alabama (2012); hold that the Miller decision was retroactive in Montgomery v. Louisiana (2016) leading to the resentencing of 2000 individuals serving life without parole for crimes committed as juveniles; and recognize that the “reasonable child” will experience police interrogation and custody differently than the “reasonable adult” for purposes of interpreting Miranda warnings in J.D.B. v. North Carolina in 2011. The rapid series of cases successfully using adolescent developmental science led to national prominence for Juvenile Law Center.

Our leadership in establishing the U.S. Supreme Court’s developmental jurisprudence for youth in the justice system paralleled our work in the Luzerne County, Pennsylvania “kids for cash” judicial scandal, which garnered international headlines for its accusations that two Pennsylvania judges had accepted nearly $3 million in alleged illegal kickbacks from private individuals behind a for-profit juvenile detention center. As the federal criminal indictments alleged, from 2003-2008, these two judges – Mark Ciaverella and Michael Conahan – hid these payments from state and federal authorities in a corruption scheme that profited off the backs of children. Possibly the most egregious judicial corruption scandal in the history of the American legal system, it altered the lives of more than 2500 children and involved more than 6000 cases. Through our work in both the state and federal proceedings, the children and their parents ultimately shared approximately $24 million in settlement proceeds, and the adjudications of the youth were vacated and their records expunged. Juvenile Law Center’s work captured the attention of national media and led to both a book and award-winning documentary film.

Today, in addition to systemic and class-action litigation, we have an extensive appellate docket with cases in dozens of states nationwide; our other strategies: legislative reform; strategic communications; research and education all have a system-wide breadth.

About a dozen years ago, we started our Youth Advocacy Program. Today, Youth Fostering Change and Juveniles for Justice – two components of the program - work with up to 30 young people each year and we have an amazing network of alumni who continue to work with us in our Youth Speakers’ Bureau. Each year, our youth advocates focus on a specific reform project based on their experience in the child welfare and justice systems and their increasing knowledge of how those systems work and what is needed to reform or transform them for the young people they serve. They will be presenting the latest projects over three lunchtime presentations beginning October 16th. We hope you can join us and learn from these effective advocates. Watch your emails for details.

As we look to the future, we will continue to look for ways to center youth voice in our work. We will also use our advocacy skills to aid in dismantling the structural racism at the core of the justice and child welfare systems, and also work to achieve economic justice for the youth and families involved in both of these systems.

We look forward to sharing together this fall, looking back over the landscape of our work and looking forward toward the horizon of where our work is headed. The number one song in 1975 when Juvenile Law Center opened its doors was the Captain and Tennille’s Love will Keep Us Together. Amidst all the challenges we are facing in 2020, we look forward to celebrating and reflecting with all of you.