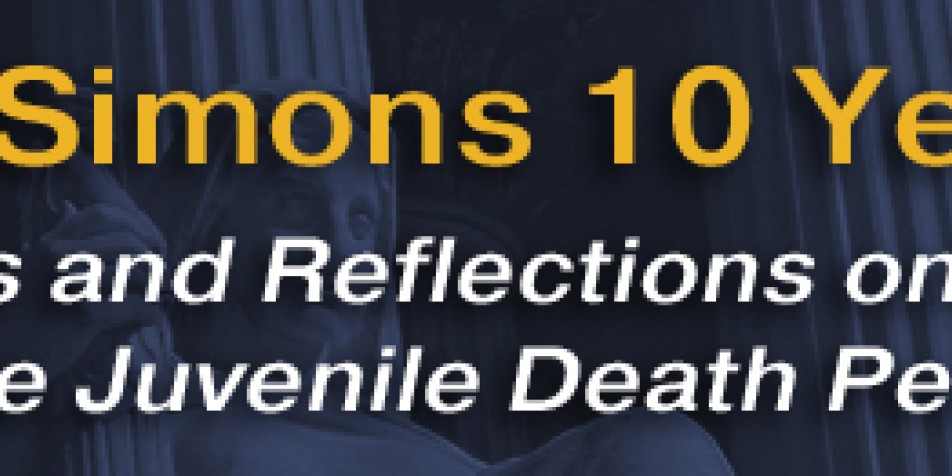 Ten years ago, on March 1, 2005, the United States Supreme Court, in Roper v. Simmons, finally abolished the juvenile death penalty. The decision ended a barbaric part of our criminal justice history and aligned our juvenile sentencing practices with those of every other nation in the world. It was a momentous day; the lives of 72 death row inmates, including Christopher Simmons, all convicted for homicides committed when they were under the age of 18, were saved.

The history of the events leading to this victorious ruling remain, for the most part, in the memories and notes of the bold, smart and dedicated individuals who made it happen. In celebration of the 10th anniversary of Roper, we conducted online conversations with some of those individuals, inviting them to share their recollections and reflections on their work that culminated in this extraordinary decision.

The dialogue has been enlightening, poignant and inspirational. Through this 3-part blog series, we share those conversations with you.

Be sure to continue reading in part 2 and part 3.

The MacArthur Foundation established the Adolescent Development and Juvenile Justice (ADJJ) Research Network in 1996. What was the foundation’s goal in establishing the ADJJ network? Was there a ‘problem’ the foundation was hoping to solve?

Laurie Garduque, Director of Justice Reform, MacArthur Foundation: As concern about increasing juvenile crime peaked, we were alarmed at the wave of harsh juvenile justice reform sweeping the country that blurred lines between adults and juveniles. States treated children and adolescents as if they were adults. Youthful offenders were automatically transferred to the adult system. The juvenile justice system became increasingly harsh and punitive and lost its the rehabilitative ideals. While it was too late to influence the “reforms,” our goal was to stem moral panic and reverse the tide. The Foundation aimed to create a knowledge base for the next generation of reform: a more rational, fair, effective juvenile justice that recognized developmental differences between adolescents and adults.

Existing research did not address the legal implications of adolescent developmental immaturity with respect to competency, culpability, and capacity for change. The [ADJJ] Research Network engaged a team of practitioners, researchers, and legal scholars to ask questions that were legally and morally relevant. Moreover, we wanted to determine whether or not the “reforms” improved public safety and at what cost to youth, their families and community, and society.

What motivated you to become involved with the ADJJ Research Network?

Professor Laurence Steinberg, PhD: In the mid-90’s, the Foundation was considering a number of different directions for funding work on children and the law, including development and juvenile justice. Laurie Garduque asked me if I would consider directing the ADJJ Research Network. I told her that I knew nothing about juvenile justice, and her response was “Precisely!”

The Foundation wanted a fresh approach that was grounded in adolescent development rather than criminology. I think this was, and still is, consistent with the view that juvenile offenders are not “little criminals” but adolescents who’ve gotten into trouble with the law.

Professor Elizabeth “Buffie” Scott, Esq: I had been interested in adolescent decision-making in legal contexts for quite a while and had written about how adolescents’ immature judgment could lead to making harmful choices. In the early 1990’s, attitudes about juvenile crime became more punitive, and it was clear that lawmakers weren’t focusing on developmental differences between teens and adults or how immaturity might contribute to juvenile offending. The [ADJJ] Network was tasked with bringing a developmental focus to juvenile justice policy and to conduct research that could inform such policy. Choosing Larry [Steinberg] to direct the Network was a brilliant move, and I was thrilled to join.

What event(s) motivated you to become involved in the fight against the juvenile death penalty?

After the first fruits of my efforts were published in 1983, including an ABA Resolution, I cranked out research publications for the next 20 years. This body of work and my book Death Penalty for Juveniles (1987) were regularly cited by the U.S. Supreme Court. I also began serving as an attorney in juvenile death penalty cases and testifying before state legislatures. During all of this, I accumulated data about juvenile death sentences and executions and began compiling and updating the data for periodic reports on the issue.

Patricia Puritz, Executive Director, National Juvenile Defender Center: There wasn’t a singular event that motivated me, but when I began working at the ABA Juvenile Justice Center in the mid-80’s, I inherited an ABA Resolution opposing the death penalty for children under 18 [written by Streib]. I was also armed with Vic Streib’s regular reports identifying and tracking the status of every juvenile on death row nationwide. It felt completely irresponsible to have that information and not do something. This was one of America’s dirtiest secrets, and we had no choice but to expose this truly revolting practice. Things really changed in November, 1999, when Sadie Rosenthal (ABA) and Anne James (International Justice Project) found that one of the first actions in the new millennium - literally in the first week! - was to execute 5 juveniles in nearly back-to-back executions. This was an unbearable realization. I sent a memo to this effect to Stephen Harper, and a small band of mighty warriors was unleashed and kept fighting until the job was done.

Stephen Harper, Visiting Clinical Assistant Professor: I hadn’t paid attention to the juvenile death penalty until I got a memo from Patti Puritz about 5 juvenile offenders set for execution in the beginning of 2000. Steve Drizin and I started writing op-eds and worked with Patti to use the ABA website to get the word out and stop those executions.

David Fassler, MD: My involvement with Roper came about as a result of a call from Steve Harper to the American Academy of Child and Adolescent Psychiatry. Steve was looking for a child psychiatrist who would be willing to help explain adolescent brain development to state legislators. Mary Crosby at the Academy contacted me, and I agreed to try and help. The first step was to get caught up on the science of adolescent brain development, which had evolved significantly since I was in medical school. I also borrowed a realistic model of a brain from the University of Vermont.

Steven Drizin, Clinical Professor of Law: I was recruited by Patti, who learned that several juveniles were scheduled to be executed in a span of fifteen days in early 2000, including Christopher Thomas and Steve Roach of Virginia and Glen McGinnis of Texas. Never before had there been such a cluster of executions in so short a period of time. We felt compelled to try to stop the executions and use the cluster to educate the public about the fact that the United States executes juveniles.

What motivated you to organize the convening at Northwestern University in 2000? What event(s) made you think it was time to take on the juvenile death penalty?

Bernardine Dohrn: First there was Victor Streib, for whom abolishing the juvenile death penalty was a career mission. He was the keeper of the website and data, consultant to juvenile death penalty attorneys, and a major contributor to the litigation strategy of the 1980s that resulted in Thompson v. Oklahoma and Stanford v. Kentucky. These cases were the roadmap: to illustrate “evolving standards of decency,” one must show “objective indicia” such as state legislative abolition and the behavior of juries. I pestered Professor Larry Marshall [at Northwestern University] to add a workshop on the juvenile death penalty to his 1999 conference on wrongful convictions and [adult] death penalty. He called it “Another Kind of Innocence” and asked Victor and I to co-chair. To our astonishment, more than 100 people showed up, inspiring a similar convening at Northwestern in 2000.

Harper: It became clear that we needed to make a more comprehensive effort than stopping the 5 juvenile executions scheduled for early 2000; we needed to end the juvenile death penalty. The first step was to meet and discuss the outlook and strategies. Bernardine got funding to hold the first convening in November, 2000.

Drizin: When we convened in 2000, our working group (later, the Juvenile Death Penalty Initiative), had been working on this issue for a year. By the time of the convening, we had refined our talking points, written several op-eds and essays in major newspapers, built a website, and started building a coalition of organizations to support our cause and issue policy statements. The meeting was our chance to vet our strategy and talking points with folks from the death penalty abolitionist world, the criminal justice world, the juvenile justice world, and potential funders. We also wanted to share our strategy with Vic Streib, who had fought this fight for decades and had been through many of the battles we expected to confront.

What were your expectations for the Chicago convening? Did you map out a particular strategy or strategies?

Harper: Expectations were very limited. We first needed to determine whether there was a core group that could take on this issue, figure out what the messages were, and who would be the messengers. We felt that if the public was educated about juveniles and the juvenile death penalty, then opposition to it would grow quickly. However, this issue was on no one’s radar. Juvenile lawyers who understood kids and were more concerned about this issue had to lead the way.

Dohrn: The plan was to build upon the U.S. Supreme Court decision in Atkins v. Virginia by building a campaign that would not compete with a broader movement to abolish the death penalty in general, especially in states where abolition was a strong possibility. The campaign was also based on the growing recognition of the implications of wrongful convictions and the country’s distasteful singularity regarding its practice of executing juvenile offenders. Twenty people participated in the first meeting, including Victor Streib, Patricia Puritz, Randolph Stone, Connie de la Vega, Sandra Babcock, James Bell, Bob Schwartz, Stephen Harper, Herschella Conyers, Anne James, Sandra Babcock, Human Rights Watch, law students and others. The gathering was made possible by one-time funding from the Joyce Foundation. Until 2004, the only other funding came from the Annie E. Casey Foundation, and the MacArthur Foundation supported important research.

Drizin: I didn't know what to expect. We wanted to introduce ourselves to people and organizationswho had worked on this issue for years and get their feedback. We were already convinced that the time to abolish the juvenile death penalty had arrived, which may have seemed crazy in the wake of the juvenile “super-predator” era and “adult time for adult crime,” mandatory minimums, and other punitive polices that fueled mass incarceration. We wanted to explain why it was time to mount a full-force effort and why we, as juvenile justice lawyers, were the right group to coordinate the end of the juvenile death penalty.

Support for the death penalty in general was declining, largely due to public concerns that innocent people might be executed. Juvenile violent crime had declined for six years in a row, and we believed a “kids are different” framework could change the narrative about juvenile offenders. We had faith in new, emerging science about the teen brain that seemed to provide a “hard science” backup to what adolescent development experts had been telling us for years. This science didn’t answer all questions about juvenile culpability. But, it was new; it was cool, and the fMRI images of teenage brain scans were a vivid and compelling way to show that juveniles as a class were less culpable for their crimes.