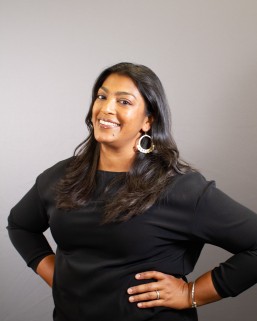 Riya leads Juvenile Law Center’s Transfer and Adult Sentencing projects. In that role, she has written dozens of amicus and appellate briefs in state and federal courts on behalf of youth tried as adults and youth convicted in adult court who are subjected to life without parole and other lengthy sentences. Riya has worked with colleagues to develop legal arguments that center equity and highlight the racial disparities that have led to the mass incarceration of communities of color.

Riya also leads Juvenile Law Center’s Decriminalization and Collateral Consequences initiative, focusing her efforts on juvenile record confidentiality and expungement and the elimination of sex offender registration laws for youth. Riya was counsel in In re R.R. and H.L., challenging the Pennsylvania juvenile record expungement law and In re J.B., a successful challenge to the imposition of harsh registration laws for Pennsylvania youth charged with sexual offenses. Riya is a national expert and routinely provides litigation support to attorneys challenging registration across the country.

Riya is widely published in both academic and non-academic publications. She has written extensively on collateral consequences, expungement, sex offender registration, and the right to counsel. She also has co-authored numerous briefs in cases before the United States Supreme Court, including in Jones v. Mississippi on the procedures required to sentence a child to life without the possibility of parole, Safford v. Redding, which held a school strip-search unconstitutional, and Malvo v. Mathena on whether the protections required to sentence a teenager to life without parole apply in discretionary sentencing schemes. Riya also previously represented youth in dependency proceedings in Philadelphia Family Court.

Riya is Co-Chair of the Children’s Rights Litigation Committee of the American Bar Association Section of Litigation. She also serves as an advisory member of the ABA Commission on Youth at Risk.

Protecting Youth From Themselves: The Overcriminalization of Consensual Sexual Behavior Between Adolescents, 40 The Child. Leg. Rts. J. 1 (2020). (with Jean Strout & Divya Vasudevan).

The Hidden Consequences of Visible Juvenile Records in HANDBOOK ON THE CONSEQUENCES OF SENTENCING AND PUNISHMENT DECISIONS (Beth M. Heubner and Natasha A. Frost eds. 2019). (with Megan C. Kurlychek)

Ineffective Assistance and Drastic Punishments: The Duty to Inform Juveniles of Collateral Consequences in a Post-Padilla Court, in DUKE FORUM FOR LAW AND SOCIAL CHANGE, 2011. (with Lisa Campbell)

Protecting Personhood: Legal Strategies to Combat the Use of Strip Searches on Youth in Detention, 60(1) RUTGERS L. REV. 67 (2007). (with Jessica Feierman)

Will Amy Coney Barrett protect the constitutional rights of children and youth?

Failure to change or a failed system? | The complexity of charging children as adults