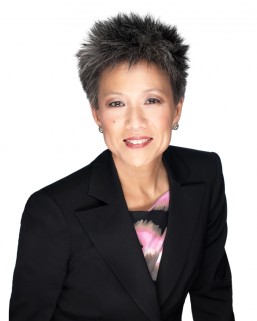 Susan Jin Davis, Chief Sustainability Officer for Comcast Corporation, has over 25 years of experience in the communications and technology industry. In her current position, Ms. Jin Davis is responsible for identifying sustainable strategies and priorities and for implementing the Company’s Sustainability Program across all of Comcast business units and functions.

Prior to her current role, Ms. Jin Davis was Senior Vice President of Operations Compliance and was responsible for implementing product policies, operationalizing regulatory and legal requirements, reducing costs to the cable business, and managing business compliance.

In 2011, Ms. Jin Davis negotiated a historic Memorandum of Understanding between Comcast and the Asian American community as part of the Company’s merger with NBC Universal that creates ground-breaking commitments in the areas of programming, supplier and employment diversity, and community investment. She serves on Comcast’s Internal Diversity Council and is a Company liaison to the Comcast and NBCUniversal Joint Diversity Council. She is an executive sponsor of Asian Pacific Americans at Comcast, a Company affinity group.

Ms. Jin Davis was also responsible for launching Comcast’s Internet Essentials Program in 2011. Internet Essentials offers low-cost Internet service, discounted computer equipment and free digital literacy training to families with at least one child eligible to participate in the National School Lunch Program. Internet Essentials is Comcast’s largest, most successful community investment initiative, having connected more than 600,000 families – over 2.4 million low income Americans – to the power of the Internet in their homes.

Ms. Jin Davis is also integrally involved in the Company’s approach to digital literacy, providing resources to customers on safe Internet use with particular emphasis on helping families understand the Internet and teaching children how to responsibly use Comcast’s services. She leads the Company’s On-Line Safety Advisory Council, an external body of leaders in the area on-line safety.

Recently, she completed the Women in Cable Telecommunications Senior Executive Summit at Stanford University’s Graduate School of Business and has completed the Women’s Executive Leadership Program at the Wharton School of Business. She received the 2010 Paragon Award of the National Association of Multi-Ethnicity in Cable and completed CTAM’s Executive Management Program at the Harvard Business School. Ms. Jin Davis was a fellow in the Betsy Magness Leadership Institute of the Women in Cable Telecommunications. She has been named one of the “Most Powerful Women in Cable” by CableFAX and one of the “Top 50 Most Influential Minorities in Cable” by CableWorld for many years. Ms. Jin Davis is actively involved in Comcast’s diversity efforts, particularly as it relates to the Company’s relationship with the Asian American community. She serves as the Chair of the Board of the Asian Pacific American Institute for Congressional Studies and is a director on the Boards of the Asian Pacific Islander American Scholarship Fund, the Asian/Pacific Islander American Chamber of Commerce & Entrepreneurship, and the Juvenile Law Center. Ms. Jin Davis also serves on the Board of Trustees of Bryn Mawr College.